In just four weeks, the 2019 (part 1) CrossFit Open will begin.  I added “part 1” because with the restructuring of the the CrossFit Games Season, we will actually get to experience the CrossFit Open twice this year!  It sounds weird, but in reality, it makes sense.  So, before I go any farther, I will explain what’s going on with all of this as succinctly as possible.
Background:  What is the CrossFit Open?
Since 2011, the CrossFit Open has signaled the beginning of the CrossFit Games Season as CrossFit seeks to find the “Fittest on Earth.”
The Road to the Games use to begin by doing well enough in the Open to qualify for Regionals.  The specifics and placings requirements for that that has also evolved over the years.  At Regionals, individuals and teams had to place in the highest x number of positions to qualify for the CrossFit Games.
2019 is a transition year, however, as Greg Glassman has removed the “regionals” concept.  What remains is still an opportunity to qualify for the Games straight from the Open.  What has emerged is a rather extensive list of Sanctioned Competitions where individuals can and teams now must qualify for the games.  In order to fit all of the pieces of the competition season, the CrossFit Open leading to the 2019 CrossFit Games is staying at the same time of year as it has in the past (last week in February – end of March), but that has made it somewhat confusing to many as that this is right in the middle of the “Sanctional” season.  But, for us “normal CrossFit athletes,” its really not a big deal and in all actuality, just makes sense.  It will make even more sense and flow a lot better come October, when the Open for the 2020 CrossFit Games takes place.  This will put the CrossFit Open at the beginning of the “competition” season again and then all of the Sanctioned Competitions will take place over the course of the next several months to give people more opportunities to qualify for the games.  Teens and Master’s will still have their online qualifiers as they have had in the past, and I believe they are sticking with the April time frame, so nothing is changing there.
So, now we have kind of an understanding of what’s going on with the sport of CrossFit, but what does it matter to me if I am doing CrossFit for my health and not the sport?
There are two words that come to mind in response to that question.
Community and Opportunity.
Community:  Often competition creates a great sense of community.  At Mac-Town, we have traditionally exhibited this with our intramural teams and Friday Night Lights.   Yes, it seems ironic to be talking about building community while we literally divide ourselves into teams (or sub-communities, if you will).  But, that is something that truly takes place.  No one is cheering harder for you or holding you more accountable to not only do the Open workouts, but also get to class on the days in between, than your own teammates.  Sure, there is plenty of jokes and teasing that take place.  But, it’s always good natured!  That’s how we ended up with team names last year such as #beatJames and #beatKingJames, which didn’t work because James’ team won for the 2nd year in a row!  Seriously though, the Friday Night Lights, nerve-wracking as they are for some, are truly special and fun bonding experiences.  You have the actual thrill of competition, having a judge count your reps and hold you to standards, and loads of cheering by all those who are present. 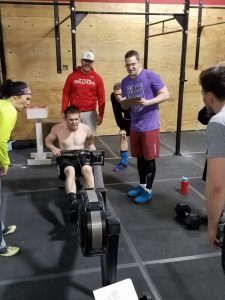 Along with that, its a great social opportunity and a chance to share really good food and drinks with your Mac-Town Family! People often stay and talk for hours each of those 5 Friday nights of the Open season. 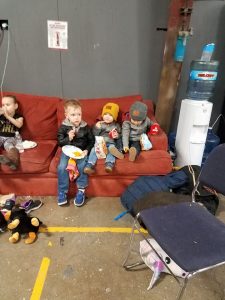 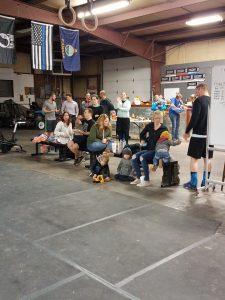 And I think, think most of us who have done the Open before, can relate to the special satisfaction of completing that 5th and final Friday night, where you can sit back, reflect and chat about all of the experiences, awesome performances, and yes, the sense of relief.
Opportunity:  There are a ton of opportunities presented by the Open.  As I have already mentioned, the greatest opportunity may simply be the opportunity to get to know your fellow members that much more.  Or, maybe just to actually see them workout and not just see their score in SugarWOD.  The next most gratifying opportunity is the chance for firsts.  So, many people accomplish things that they have never done before during the Open.   Whether it be the first double under, toes to bar, pull-up, chest to bar, or even muscle up, each “first” is truly special.  And, all of Mac-Town will celebrate that with you. 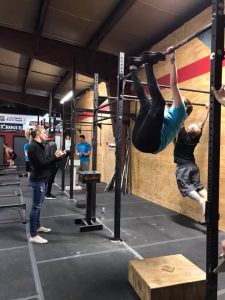 Other feats have also been experienced such as PR lifts or even just using heavier weights than normal for a workout.  For those who are concerned about any undesired pressure to perform, just remember pressure makes diamonds.  There is no pressure to be something that you are not.  Only a great support system that wants to help bring out the best in you!